What is the value of frame analysis for understanding contemporary media outputs and their connections with those that produce and consume them? Answers to these and related questions were provided in presentations and conversations at a one-day event at the University of Leicester. ‘Caught in the frame: Frame analysis as contemporary media scholarship’ was coordinated by the BSA Media Study Group and the University of Leicester’s News and Journalism Research Group.  Scholars from Germany, Japan as well as the UK came together on 19th September, 2012 to introduce examples and ideas in a bid to examine the continuing relevance of frame analysis. 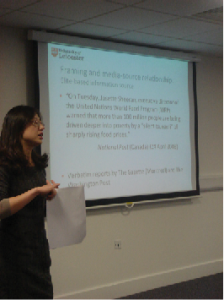 After brief opening remarks from the event’s organiser,  Julian Matthews, the day started with a discussion of frame analysis as relevant to understanding the reporting of ethnic conflict, exploring the war in Kosovo in particular. Philip Hammond’s paper recognised that political elite framing activities had shaped the Kosovo war coverage but challenged the academic view that a common ‘ethnic conflict frame’ was reproduced as an outcome in the process. Capturing this and other unexpected characteristics in reporting requires the researcher, he suggested, to attend to the political context of issues when designing and conducting frame analysis research. The view that media framing can be influential is commonly accepted, yet does it apply also to those who promote frames to journalists? Maria Touri answered yes in a paper that combined both sociological and psychological theoretical insights.  She explained how political leaders, on witnessing moments of wider discursive contest where their frames fail to dominate media coverage, experience a loss of control that leads them ultimately to participate in greater risk taking behaviour – a real concern when considering connections between political leaders and war coverage!   The priorities of different media organisations were then considered in the last paper in this session. Oladepo. T. Oluwatomi introduced the complexities present in the reporting of terrorism, showing how frames presented by the BBC, CNN and Al Jazeera in their reporting of the Mutallab terrorist attempt differed according to their national  or geographic priorities.

The second session of papers underscored the importance of the context of media operations to explain the media’s framing of issues. Using the example of the crisis in world food levels, Sarah Gong introduced connections between the media and state to explain the former’s partial reporting on the issue.  Speaking next, Simon Collister widened the focus to discuss the relevance of frame analysis in context of the new networked-media environment. Although complimentary of the  explanatory potential of frame analysis, his paper advised that the ‘frame-as-assemblages’ concept was better suited to capture the complexity and materiality of those new environments in which frames are produced and received. Finally, Dimitrinka Atanasova suggested that online media environments provide audiences with the opportunity to participate in the framing process. Her paper discussed connections between readers’ comments and news visuals in online news coverage of obesity and reflected on the methodological challenges common to examining framing in the online news story. 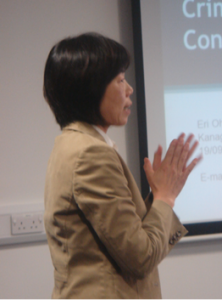 The final session of the day discussed cultural narratives as present in media frames before broadening the focus of attention to other factors that shape the production of frames. Eri Ohba, reporting on a longitudinal study of crime reporting in Japan (1949-2009), outlined how a cultural narrative of ‘evil causes evil’ underpins youth crime stories. Staying with the influence of crime story frames, Barbara Malekar discussed the framing of news story characters as shaping audiences’ interpretation of who is to blame. Based on empirical research with news audiences, her paper discussed how the language used to describe characters and their actions in celebrity crime news stories largely determined with which character audiences identified and ultimately their views on the character’s culpability.  The last paper of the day introduced a model to explain the relative influence of factors on the journalistic production of frames.  Matthias Potthoff’s contribution commented on the relative influence of individual journalists, organisational demands and extra organisational factors including those at the societal level. He concluded that events – political announcements, in particular – shaped the different frames in various European media accounts of a political story. 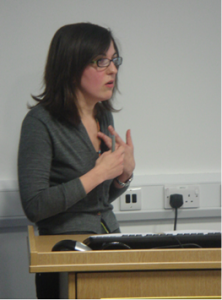 In all, an interesting and informative day was had by all!

A big thank you to all the presenters and contributors.

Visit the following for more details on The BSA Media Study Group, including its forthcoming activities:  https://www.britsoc.co.uk/specialisms/Media.htm