Leeds has been a great place to visit this summer. Not only has it welcomed the Tour de France, but it is also where the 11th Annual MeCCSA Postgraduate Conference took place on June 23rd and 24th! The conference theme was ‘Global Interdependence: Knowledge, Experience and Theory’, and it took place at the Institute of Communications Studies (ICS) at the University of Leeds. The conference was supported by the Higher Education Academy, the MeCCSA Postgraduate Network and the Institute of Communications Studies.

The last decade in the field of cultural, media, and communications studies has seen the emergence of increasing discussions around the idea of “Global” broadly conceived. Globalisation, post-colonialism, neo-liberalism, digital convergence, development: all these concepts have infused the debates in the field. They point to the many challenges of studying a world seemingly more connected yet still deeply unequal. Binary and polarised categories have notably dominated these academic discussions: homogeneity vs. heterogeneity, changes vs. continuities, nationalism vs. cosmopolitanism, optimism vs. pessimism, structure vs. agency, domination vs. empowerment. As the world becomes increasingly interdependent, media and communication research must engage with the global need to assess to what extent these binaries still hold, or whether they provide a good framework to understand this increasing interdependence.

These debates were at the heart of this year’s MeCCSA-PGN conference. The conference provided a platform for exchange of knowledge, theory, and experiences across the globe and therefore hopes to foster mutual connections and learning across borders, identities, and beliefs. Masters and PhD students, and early stage postdoctoral researchers, were invited to share their work. The conference was organized around thematic panels, each hosted by a specialist in the field from ICS, including, among others, Professor Kevin Barnhurst, Dr Katrin Voltmer, Dr Chris Paterson and Dr Bethany Klein.

The conference lived up to the expectations of this ‘Global’ focus. Over the course of two days, 40 students based in universities in Turkey, the Netherlands, the UK, Germany, France, Nigeria, India, Belgium, Hungary, and Brazil presented their work. Participants heard a wide range of papers tackling issues as diverse as journalistic practices in Nigerian, Pakistani, Turkish and Chinese newsrooms; representations of race among the ‘International’ black youth culture in Mauritius and Réunion; cyberqueer techno-practice and offline gay male experience in contemporary China; the role of Facebook in determining visual representations of global poverty; the cross border circulation of national film productions in Europe, or a ‘Critical Theories’ panel that brings in dialogue, Heidegger, Bourdieu and Benjamin.

Four tremendous keynote speakers engaged with the theme of this year’s conference. With the passing of Stuart Hall this year, each of their talks was, one way or another, a testament to the wide-ranging legacy of Hall to our field of studies. Dr Katy Parry, from the University of Leeds, kicked off the conference with a talk on Pussy Riot and the embodiment of dissent in public spaces from the perspective of globally-aware visual protest. Professor Lilie Chouliaraki, from the London School of Economics, talked about the rise of a self-oriented solidarity and its moral and political implications for public ethics and global activism. Dr Anamik Saha, from Goldsmiths, directly called upon the work of Stuart Hall to discuss the need to reinvigorate the study of race and ethnicity within media studies today through, notably, the inclusion of more global contexts, a greater engagement with production (and not only representation), and an explicit grounding of discussions of cultural identity within issues of inequality and discrimination. Finally, Professor David Hesmondhalgh from the University of Leeds and author of The Cultural Industries and the recent Why music matters?, closed the conference by outlining a moral economy of culture approach as a way to bring ethical questions regarding the relations between culture and economy. 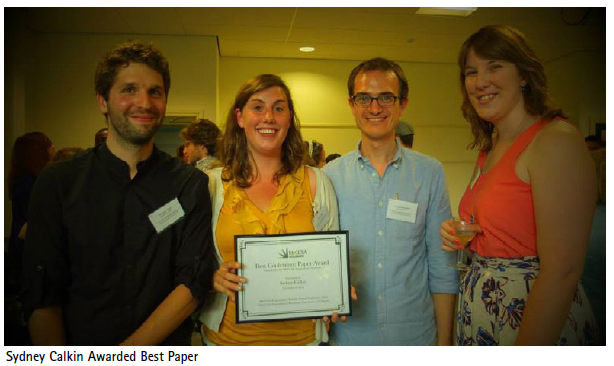 In addition to presentations and keynotes, participants attended several workshops to discuss the professional skills vital for a career in academia. Professor John Corner, editor of Media, Culture and Society, talked about how to get your article published. The head of ICS, Dr Bethany Klein and Professor Kate Oakley led a workshop on the do’s and don’t of academic CV and job applications. Finally, Rachel Tavernor from the University of Sussex and Sam Ward from the University of Nottingham convened a student led session on teaching media and cultural studies.

During the conference, the MeCCSA Postgraduate Network held its Annual General Meeting where the elections of the PGN executive committee took place.

At the end of the first day, the MeCCSA PGN executive committee also announced the winner, Sydney Calkin from the University of York, of the best paper award and its £250 prize, which is a first in the history of the MeCCSA PGN. At the end of the second day, delegates gathered for the conference dinner and a traditional pub quiz. Following the conference, participants were invited for a day out as a way to carry on the discussions started during the conference itself in the magnificent setting of the Yorkshire Dales.

As part of the Postgraduate Network’s efforts to expand and regionalise its offerings to members, the last in a series of training events took place at the University of Nottingham earlier this month. The event was organised by postgraduate Dana Selassie and brought together speakers offering top tips and provoking lively discussion on the practical, methodological and policy implications of the need for researchers to involve and engage the wider community.

The day started with a sketch of the big picture of the Public Engagement agenda by Tara Webster-Deakin, Widening Participation and Outreach Officer for the University’s Arts Faculty. This led to a discussion of how changing the public image of HE goes hand in hand with the meaningful communication of research to the public. Then Caroline Hennigan, Programme Director at Nottingham’s Broadway Cinema spoke in conversation with PGN executive committee member Sam Ward on the ways in which cultural organisations like hers can act as facilitators of public-academic interaction.

Following a networking lunch, two academics from Nottingham gave observations drawn from their own experience of the advantages and pitfalls of engaging with communities outside academia. Philip Cowley, Professor of Parliamentary Government, drew a vivid picture of how important the careful harnessing of social media is to the relevance of research, while Gianluca Sergi, Director of the University’s Institute for Screen Industries Research (ISIR), set out his ABC of working with private sector partners.

Before the event at Nottingham, the network had held training events on a range of other topics in London, Sussex and Liverpool. It is hoped this will form the starting point for an ongoing schedule of regular regional events, so that the network has a more concrete presence in more parts of the country. A video of Gianluca Sergi’s talk will be available in due course on the Industrial Approaches to Media website, which is also hosted by ISIR.